More Writers of the Spanish Civil War. Experience put to use 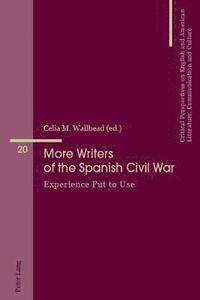 Further to the first book, Writers of the Spanish Civil War: The Testimony of Their Auto/Biographies (2011), which featured the writings on the war (1936–39) of six key British and American authors: Gerald Brenan, Robert Graves, Ernest Hemingway, George Orwell, Stephen Spender and Laurie Lee, this new work studies the actions in the war of those physically involved and writings focused on the war, either at the time or later, by eight more foreign authors: Virginia Woolf, John Dos Passos, Franz Borkenau, V. S. Pritchett, André Malraux, Arthur Koestler, Martha Gellhorn and Peter Kemp. In addition to comparing their autobiographies with what their biographers said, in order to show up any discrepancies, as had been done in the first book, here, the texts are scrutinized to detect use of stereotypes or adaptation of the material to other purposes in the writing. New perspectives are introduced now in that two of the authors are women, one writing from a distance but deeply affected by the war (Virginia Woolf) and one active in journalism on the spot (Martha Gellhorn), and our final author, Peter Kemp, went to Spain to fight on the side of the Nationalists under Franco as opposed to the Republicans.