The Discursive Construction of Economic Inequality 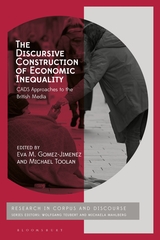 This book analyses diverse public discourses to investigate how wealth inequality has been portrayed in the British media from the beginning of the 20th century to the present day. Using a variety of corpus-assisted methods of discourse analysis, chapters present an historicized perspective on how the mass media have helped to make sharply increased wealth inequality seem perfectly normal. Print, radio and online media sources are interrogated using methodologies grounded in critical discourse analysis, critical stylistics and corpus linguistics in order to examine the influence of the media on the British electorate, who have passively consented to the emergence of an even less egalitarian Britain. Covering topics such as Second World War propaganda, the ‘Change4Life’ anti-obesity campaign and newspaper, parliamentary and TV news programme attitudes to poverty and austerity, this book will be of value to all those interested in the mass media’s contribution to the entrenched inequality in modern Britain.

«This fascinating and insightful collection addresses one of the most pressing issues of our time – the discursive construction of inequality. It does so with all the rigour that corpus linguistic methods afford. With a range of techniques exploited to investigate various sites of inequality, the book provides a comprehensive overview of how corpus-assisted discourse studies can address issues of class, poverty, social mobility and austerity. Timely, powerful and methodologically rich, this is an essential read for scholars in corpus assisted discourse studies and critical discourse studies.» –  Christopher Hart, Professor of Linguistics, Lancaster University, UK

Introduction: The Discursive Construction of Economic Inequality in the UK, Eva M. Gomez-Jimenez (University of Granada, Spain)
1. Poverty and Social Exclusion in Britain: A Corpus-Assisted Discourse Study of Labour and Conservative Party Leaders’ Speeches, 1900-2014, Nuria Lorenzo-Dus (Swansea University, UK) and Sadiq Almaged (Thi-Qar University, Iraq)
2. Inequality and ‘The Language of Leadership’ in World War II, Joe Bennett (University of Birmingham, UK)
3. Revisiting the Welfare State Through the Decades: Investigating the Discursive Construction of the Welfare State in The Times from 1940-2009, Isabelle van der Bom (Sheffield Hallam University, UK) and Laura Paterson (Open University, UK)
4. What Can Be Done about Child Poverty? What The Times Said Then and What It Says Now, Michael Toolan (University of Birmingham, UK)
5. Inequality, Accountability and Responsibility in UK Press Reporting on Corporate Fraud (2004-2014) and Modern Slavery (2000-2016), Ilse Ras (Leeds University, UK)
6. Health Inequality and the Representation of ‘Risky’ Working Class Identities in Obesity Policy, Jane Mulderrig (University of Sheffield, UK)
7. We Are NOT All in This Together: A Corpus Assisted Critical Stylistics Analysis of Austerity in Print News Media 2009-2010 and 2016-2017, Brian Walker and Lesley Jeffries (University of Huddersfield, UK)
8. More Inequality, but Less Coverage: How and Why TV News Avoided ‘The Great Debate’ Either Side of the Financial Crisis 2008-2014, Richard Thomas (University of Swansea, UK)
9. The Democracy We Live in: Can There Be Democracy without Equality?, Wolfgang Teubert (University of Birmingham, UK)
Afterword, Danny Dorling (University of Oxford, UK)
Index